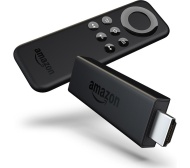 alaTest has collected and analyzed 17 user reviews of Amazon Fire TV Stick (1st gen. 2014) from Amazon.co.uk. The average user rating for this product is 3.8/5, compared to an average user rating of 3.9/5 for other products in the same category on Amazon.co.uk. Reviewers are impressed by the software. The price is also appreciated, whereas there are some mixed opinions about the remote control.

82% of the reviews on Amazon.co.uk give this product a positive rating.

You don't have to spend a lot to get a great streaming device. In fact, these Amazon Fire TV devices can do voice control, HDR, and Dolby Atmos for $40 or less.

Affordable ; Voice-based remote control ; HDR and Dolby Atmos ; Can be placed behind the TV

The Fire TV Stick addresses a number of issues we had with the Fire TV and comes with a much smaller price tag. It's not dramatically better than its competitors, but it's certainly not any worse. For $39, it's a perfectly viable streaming-media...

With the Fire TV Stick, Amazon seems to have a winner on its hands. It does everything you expect a media streamer to do with little fuss and a reasonable price tag. Whereas the Fire TV toyed a little too much with the idea of being a game console and...

The middle child of the Amazon streaming stick family

SDR picture could be more subtle ; 4K model only costs a little more

The 3rd Generation Fire TV Stick is a capable video streamer, but it drops at an awkward price point

With the Amazon Fire TV Stick (2020), Amazon's HD streamer gets a much-appreciated upgrade.

The Amazon Fire TV Stick (2020) is the latest refresh of the standard Fire TV streaming stick, adding a host of new improvements such as HDR, a 60fps frame rate, and compatibility with Dolby Atmos audio. There's now a cheaper iteration in the Fire TV...

With 4K HDR, Amazon Alexa, and very peppy performance, the Amazon Fire TV Stick 4K is the best media streamer you can buy for under $50.

If you're an Amazon customer the Fire TV stick is a no-brainer, but does it have broad appeal?

Amazon's stick-sized version of the Fire TV media hub is less than half the price and offers all of the same appealing features, save for sheer speed.

Not as quick as the Fire TV. Interface is curated primarily around Amazon content

Amazon has joined Google and Roku as a purveyor of tiny, stick-shaped media hubs with the Fire TV Stick. Like the Google Chromecast and the Roku Streaming Stick, the Fire TV Stick is a tiny bar that you stick into your HDTV's HDMI port and use just...

You really need to have Prime ; Needs a charger

While it has been available in the US since the end of last year, the Amazon Fire TV Stick finally makes its way across the pond for release in the UK and, thanks to a combination of attractive price point and rich feature set, could end up being a...

Speedy and smooth operation, great library of casual games, beefy processor and RAM, good sized storage for such a device

Requires the included power adapter for use, some UK catch-up services missing, only get the most with Prime membership

Amazon has made its intentions clear with the Fire TV Stick. It has priced it aggressively (a touch more expensive than the Chromecast, quite a bit cheaper than the Roku) but offers a lot more for the money – certainly in terms of internal tech.

Amazon released its media streaming dongle, the Fire TV Stick, in the US at the tail end of last year, expanding its connected television line-up and offering