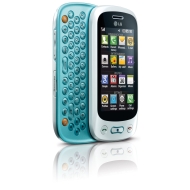 In early 2011, Virgin Mobile released an entry-level, competitively priced Android device known as the LG Optimus V . Save for a few cosmetic changes, the V was similar to the all the other Optimuses (Optimii?) released during that time, like the T , S...

The LG Optimus Slider has a spacious keyboard, little to no bloatware, and a responsive touch screen.

The LG Optimus Slider is bulky, even as a slider phone. Camera quality is poor.

If you like a real keyboard on a no-contract, reasonably priced handset, the LG Optimus Slider is a good contender. Just remember its low specs and boxy build.

The LG Optimus Slider ($159.99) is an average, low-end Android smartphone. It has good voice quality and a roomy QWERTY keyboard, but it's certainly not going to thrill Android geeks. Factor in Virgin Mobile's low-cost service plans starting at $35 per...

LG Optimus Zip is the latest android smartphone added to the portfolio of TracFone, the prepaid US carrier. It is an updated version of LG Enlighten side slider still high for grabs in the US through Verizon Wireless. slider ...

The LG Optimus Slider is available at Virgin Mobile for $199.99 without a contract. It offers a 3.2 inch touch screen, a side sliding physical keyboard, Android 2.3.4 Gingerbread and a 3.2 MP camera. Find out how the design, user interface, features...

Ultimately the LG Optimus Slider is far from the most exciting smartphone on the market but at $199.99 without a contract it does represent good value for money. This should serve as a good introduction to Android for anyone who is new to the platform....

"compact 1 hand swype and type too!"

This device combines smooth internet and great texting operated without a stylus! While android gingerbread will not continue forever it may keep current use of newer apps.

It currently lacks the spell check built into WM 6

Great phone just for basic use.

Good phone for overseas use and already unlocked

Who uses 900mhz in north america for 3G? I don't want to mislead anyone.

2100mhz is is the uplink ; 1700mhz is the download ; I've heard stuff like this will work in The Big markets like Chicago or New York ; At least you still have EDGE

Sorry, I messed up with the title ; EDGE is slow compared to UMTS, and EDGE is a snail compared to HSDPA

Similar to the Xenon... works on T-Mobile 3G

This phone can browse the web but if you go that route then you need an internet data package. That and you need to make sure the 3G on your phone works before you can even surf the web. This is a good phone if you just want a touchscreen phone and you...

I own ATT's LG Xenon (GR500) and this phone (GW520) is almost the same. This phone has a 3mp camera and the Xenon only has a 2mp. The 2mp camera on my Xenon takes pretty good pictures. You can also make GIF videos ; I really like the Xenon. it's been a...

I thought this phone was absolutely awesome for about 2 months and then for no reason, it won't let me send mms because it shuts itself off. I can't access the net and when I could, it was slow as all get out! Don't recommend this phone to anyone. If...

Texting was a breeze and it was a comfortable phone