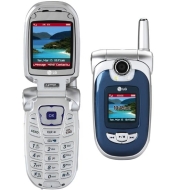 This is a powerful phone, but it's just not quite good enough to pull ahead of its closest competitor.

LG VX8100 It's often said that life is all about compromise, and to that end, cell phones are no exception. Take, for example, the LG VX8000 . While its multimedia capabilities make it one of the most well-endowed mobiles on the market, it's missing...

The LG VX8100 is EV-DO and V Cast capable, and it comes with a Mini SD card slot, a megapixel camera/camcorder, Bluetooth, loud stereo speakers, and an MP3 player.

The LG VX8100 is heavier and has less battery life than its predecessor, and it's saddled with a protruding antenna and no e-mail support, as well as limited Bluetooth use and no analog roaming.

The LG VX8100 is a smaller, louder, brighter, and more stylish upgrade of LG's VX8000. It adds Bluetooth, expandable memory, and a speedier implementation of EV-DO, but you lose some screen real estate and battery life.

If you're tired of the Lilliputian and uber-thin cell phones that litter the landscape, behold the LG VX8100. It's far from small and slender. In fact, it's the exact opposite: large and bulky. Size aside, this LG cell phone does a good job at keeping...

The LG VX8100 is a stellar dual-band CDMA mobile phone with a plethora of features crammed into its sleek frame. Visually, it is a vast improvement over its rather blocky predecessor, the VX8000, and features like its 1.3 Megapixel camera, expandable...

As the 16th day of September 2005 was approaching slowly I restlessly started hunting for new phones, service providers, and plans because two (Sprint and T-Mobile) of my wireless contracts were about to expire.

Give these to your employees...

The best of the best in cell phones...

The VX8100 is a mid-sized clamshell phone that's smaller than the Motorola E815 but larger than "micro" flips such as the LG C1300 offered by Cingular. There isn't a straight line on the device which lends itself to feeling good in hand. The casing is...

A very nice feature phone from LG and Verizon, with great ergonomics in a small clamshell package. The VX8100 has all the top features: 1.3 MP camera, Bluetooth, built in stereo speakers, stereo headset support, a vibrant display and EVDO for watching...

With each new release, handsets grow more advanced; combining a broad range of features into a compact device. Due to the widespread use and popularity of the cell phone, it's the perfect foundation to build a multifunctional gadget, being just a...

With the release of the VX8000, Verizon Wireless officially launched its EV-DO and VCAST service; providing 3G broadband speeds for video applications. The VX8000 met some mixed feelings as consumers praised its outstanding multimedia features, but...