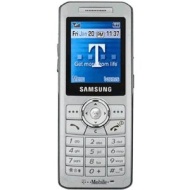 Samsung's exceptionally tiny t509 handset makes quite a fashion statement with its sleek profile. I looked at a shipping version of this standard cell phone, and was impressed with the number of features packed into its slim frame.

Boxy phone is uncomfortable to hold

The Samsung T509 sets the bar for thin, budget phones

Feels a bit fragile. Could be louder.

intro Ever since Motorola sparked a cell phone design revolution with its slim Razr handset, Samsung has been right behind it, producing thin models of its own. In December, the Samsung MM-A900 for Sprint emerged as a viable competitor to the Razr, and...

The Samsung SGH-T509 has an attractive design with user-friendly controls and a great display. It also has a solid feature set, including Bluetooth, a speakerphone, and support for EDGE.

Though some performance issues make it far from perfect, the Samsung SGH-T509 is a step above the Motorola Slvr L6.

Samsung's answer to Motorola's thin line of phones proved to be quite capable. The T509 is indeed a very good phone. Considering the features and the price this phone is sure to get some deserved attention. One thing that might be a turn off is the...

Overall, Samsung's answer to Motorola's thin line of phones proved to be quite capable. The T509 is indeed a very good phone. Considering the features and the price this phone is sure to get some deserved attention. One thing that might be a turn off...

We couldn't wait to get our hands on the Samsung T509 cell phone - the mobile that's thinner than the Motorola Slvr. We're happy to report that this world-roaming Samsung isn't just another slick handset. Many of its features are well implemented and...

A video tour of the new Samsung's new ultra-slim T509 phone for T-Mobile.

Last year Samsung entered the ultra-thin arena with its MM-A900 clamshell for Sprint, battling against and reminiscent of Motorola's popular RAZR handset. Although eerily similar in form and design, the MM-A900 was technologically more advanced,...

Is it possible to own a geometric shape? After all, Apple was sued over their "Cube" design. So if Motorola finds a way to claim ownership of the "rectangle" because of their SLVR, then the Samsung t509 by T-Mobile might be in a bit of trouble....

The Samsung is a tri-band GSM phone, supporting the 850, 1800, or 1900 frequency bands. Those of you who travel to Europe frequently will want to consider a phone which also has the 900MHz band. Audio output was clear with good volume, regardless of...