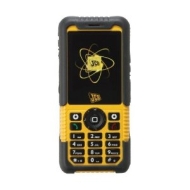 The Sonim XP1 (JCB TOUGHPHONE) really is the toughest GSM phone in the world. Built to last, the JCB TOUGHPHONE is ideal for anyone who wants a tough, durable phone. The 3-year warranty is a bonus.

For a handset to survive being dropped out of a window, driven over and generally thrown all over the place, it's got to be made of strong stuff. The JCB Toughphone is on the heavy side, but this only adds to the assurance that it can withstand a hit....

The JCB Toughphone is named this for a reason. It withstands pretty much anything you throw at it, bar maybe a nuclear holocaust.

Quite simply this is the toughest phone we have encountered. Drop it, throw it out of a window, run over it, take a shower with it, the JCB Toughphone is built to withstand the extremist of conditions